I'm sure that most old-schoolers regularly use eBay to help fill their collections, and that those individuals look forward to the various flavors of "20% off" and "$15 off $75" deals that come around once in a while. "Once in a while" is actually more predictable than some may realize: eBay pushes these deals as fiscal quarters (the ends of March, June, September, and December) draw to a close, before they pay out eBay Bucks to start the next quarter. If you're a savvy buyer, you can anticipate promotions popping up during the last few weeks of the aforementioned months, to help get the best EV for your dollar on quarter-century-old cardboard.

The above is merely a PSA for those who might not be aware of how these work. More relevant to my purpose is that I was able to use last week's coupon to help bolster my alpha deck:


It crossed my mind to simply toss these in with the existing 40, but at 16 lands + one Dark Ritual, I already feel I could be mana-light for a deck that wants to take full advantage of cards like Nightmare and Drain Life. My curve bulks up in the 3-4 CMC range, and going heavier on mana than modern deck construction would suggest is a revelation garnered from the recent GP Vegas beta draft. Running even up to 50% mana could be worthwhile when the payoff is larger activations of Pestilence and Frozen Shade.


In the end, as predicted earlier, removing the two Scathe Zombies feels like the proper upgrade, their inefficient 2/2 bodies offering little compared with a veritable sweeper and one-cost sorcery that gets back (potentially) my best creature. The fact that Raise Dead can effectively become a second Nightmare in certain situations isn't an upside I take lightly. A Gray Ogre will always be a Gray Ogre; let's roll with the higher ceiling.

The third card I purchased to crest the $75 threshold needed to activate the eBay deal was a foil The Immortal Sun for EDH, which I think is also a pretty decent long-term spec. I know many of those reading probably care little for such off-topic formats, but as a 24-year Magic veteran I can honestly say that variety is the spice of this wonderful game. Oldschool variants are undoubtedly awesome, but there are other ways of playing that can still be sweet as well. Just because you grew up listening to Bad Religion doesn't mean you can't rock out to Taylor Swift.

But I digress. Lastly, not part of my all-alpha project but undeniably worth mentioning is this gem that I traded into at GP Pittsburgh this past weekend: 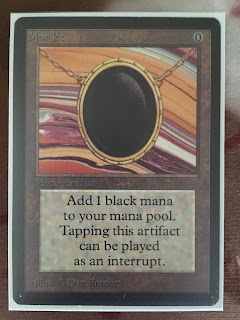 This is the first piece of beta power I've owned, and it's incredible. Trade-ups like this are getting harder and more costly in the market we're faced with this year, but I'll continue to press on as long as I can. At this point, it's time to start planning for Eternal Weekend, now only a little over four months away. Until next time!