The Nightmare arises from its lair in the swamps. As the poisoned land spreads, so does the Nightmare's rage and terrifying strength.

Several weeks ago, I mentioned a pile of cards I sent out for what resulted in an unsuccessful trade with Channel Fireball due to condition downgrading. After deductions applied by the vendor, the net credit to me would have been only half of what my usual dealer, ABU Games, was offering, so I canceled the trade and had my cards mailed back.

If you haven't yet seen, ABU recently overhauled their website, and along with that, adjusted some of their sell and buy pricing. With oldschool prices climbing ever higher, vendors have continually had to up their bids on 93/94 singles to even have a hope of keeping many cards in stock. As such, I check back from time to time, to see what's being offered on expendable assets in my trade box: cards that I'm willing, or intending, to part with to bolster my decks.

It so happens that, along with the site changes, ABU's buy prices for the cards I'd tried to trade to CFB increased even more, so much that I was looking at $375 in credit for what to CFB was worth only $150. This felt like a great chance to cash in for something to put toward the alpha project, so I immediately started my search.

Another change over at ABU was a stricter delineation between NM/M and SP condition, which resulted in the price of this Nightmare (PSA 7 before jailbreak) being lowered from the mid 400s to slightly below $300: 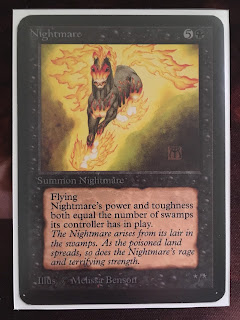 While I was a little hesitant about the color commitment that comes with a finisher that cares about the number of Swamps in play, the opportunity was simply too good, and my lust for the card was palpable. I poked around the updated ABU buylist and settled on this assortment to trade in: 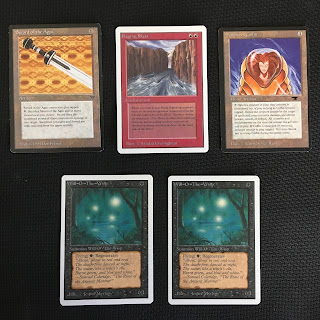 The above cards netted me the Nightmare with a bit of additional credit left over; alongside the Bad Moon I acquired for week 1, I'm pretty firmly in mono-black going forward, which is totally OK and not unexpected. From a playability standpoint, black works best with itself in Magic's original incarnation. Beyond that, my friend Adam's mono-black Revised deck when we were kids was really the inspiration for doing this at all; black was the color that awed me from the beginning, and that my project is paying homage to this is a satisfying thought.