These arrived in the mail this week: 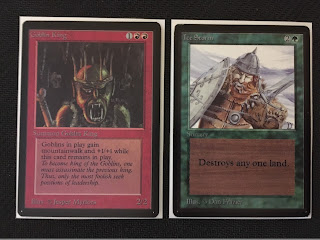 They represent significant improvements to my red/green Alpha/Beta deck, though getting them into my hands wasn't easy. Purchased from Channel Fireball, I attempted two failed trades before finding a way to make things work.

Initially, I submitted a buylist that would give me enough credit to pay for the cards. The cost felt a little steep, but that's usually the case with store trades, and I was at least coming away with the most valuable card in the exchange. This is what I packed up and shipped to CFB: 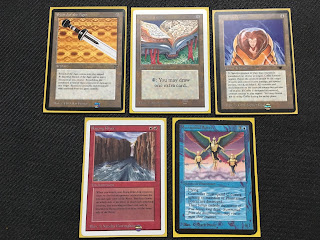 I did this knowing I might get dinged a bit on condition. I tend to be a stickler for close-to-NM cards, and everything I sent in was very clean, but I've come to expect that most shops will find issue with something in their grading, often not even the cards you expect. I allotted a little room for this in the budget.

When they received my cards, everything came back SP. The total was barely enough to cover the Goblin King, and giving up the above pile in addition to considerable cash to complete the purchase felt way too lopsided. I poked around at ABU Games (who I've traded with often and tends to be less picky about what constitutes "NM-M") and, sure enough, I was sitting on literally twice as much store credit if I sold my cards to them instead.

I worked with CFB to cancel the buylist and have my cards mailed back. To their credit, they did so at no cost to me and were very easy to work with throughout. The cards were returned safe and sound, but I still had the pending Beta order and was back to the drawing board.

For awhile, I'd been planning to sell or trade away this gem, so that was the next option I looked at: 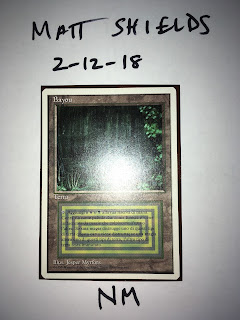 Still wanting to consummate with CFB, I submitted a buylist for the Bayou, calling it Revised for the sake of pricing (since foreign cards aren't listed as an option) and added a note at checkout that my trade was a FWB Italian copy. This would put me at the same credit value as my original buylist, and I was OK parting with the dual since I hadn't found use for it in a while. Besides, I still have this sweet Unlimited copy: 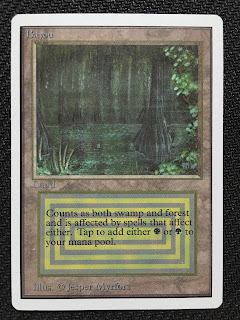 The buylist got approved, and I was confident this one would come it at NM. Still, I had a nagging feeling that maybe my checkout note hadn't been reviewed, so I sent a message to double-check. The response was that it had not, and the FWB Bayou would net me only around 60% the credit of an actual Revised copy. I politely declined.

At this point, I felt the Beta cards slipping through my fingers, so finally, I turned to Facebook, and within a couple days I had a cash buyer for the FWB Bayou at more than what I needed to complete my CFB order. He wanted it for Lands, a Legacy deck I doubt I'll ever build, and I was happy to help him realize his dream. Transactions were finalized, and a few days later, finally, I had my shiny Beta Goblin King in hand.

Here's my updated red/green deck. (I showed the original version in my opening post for this blog.) 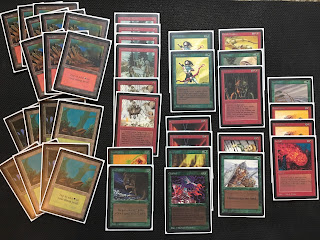 The cards are arranged by mana cost, as this is definitely a Sligh build. (Looking at this now, I could really use some Ironclaw Orcs.) While it may not have the raw power to stand against most traditional 93/94 decks, if I can be efficient and consistent enough, I might be able to get somewhere. The deck already has a lifetime 1-0 record, having squeaked out a win against my friend Sean's white/blue fliers on the back of a Balloon Brigade chump-blocking his Serendib Efreet in order for me to live just long enough to blast him for lethal with X spells. Goblin King should help pump all the little red guys, and Ice Storm is an additional answer to Mishra's Factory and Library of Alexandria.

The black deck is still in process, but I haven't added anything since I got a little ways ahead. More to come on that project in the coming weeks.