I found myself with a sufficient number of nonland cards but still short a few alpha Swamps when I remembered a purchase I made a month or two back. We add that in, along with a third Bog Wraith and two copies of Drain Life not previously posted, and suddenly, we have something beautiful: 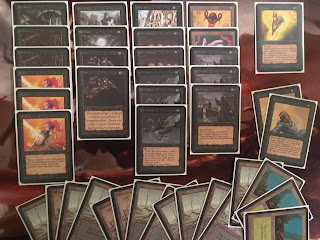 The three Forests may be first to go (even before the two Scathe Zombies), but for now, for the first time, I have a playable, 40-card alpha pile. I can officially call myself part of the #alphacult, fully embracing the 93/94 adage of playing what you have. This is a sweet accomplishment.

Back in actual 1993, before the first beta card saw the light of print, players undoubtedly struggled at times to acquire the right basics. Cards of all rarities were simply ultra-scarce. (As an aside, anyone with interest in oldschool Magic or the history of the game in general should purchase and read Generation Decks by Titus Chalk; the book is nothing short of fantastic.)


I don't by any stretch intend to stop improving the deck from here, but posts will likely be less frequent now, as upgrades won't be my top priority. This project has been a slog. As trying as alpha (and beta) cards were to acquire at the beginning of the year, the challenge and cost have since increased several times over. I was hoping to show that this was an achievable goal for anyone with the savvy, patience, and a not-unreasonable amount of expendable cash and/or trade fodder. In the end, I'm not sure it's true. While oldschool Magic is certainly a worthwhile investment, and while I'm not about to sulk over the theoretical value I've already gained, the prices of many of these cards have truly become disheartening. Rather than delve into that gory topic, I'll instead defer to the latest episode of All Tings Considered, where Bryan and Dave share their intimate feelings on the matter while offering sage advice on how to enjoy 93/94 Magic in a more budget-friendly way.

So for now, I'll continue to use this site to post deck updates and other oldschool content when the occasion presents. One of the best parts of doing this has been the connections I've made within the community in the name of a mutual passion. Keep slaying your dragons and unlocking your dreams.