Took a week off from posting, mostly busy setting up our new tractor and enjoying the outdoor weather. To keep pace with the weeks, here are two pieces of fodder acquired as part of my recent larger purchase. 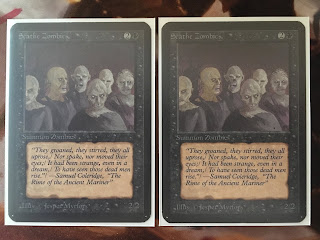 I don't have many good things to say about Scathe Zombies, aside from the fact that, at two copies, they're strictly better than Plague Rats. Maybe I can acquire a Zombie Master at some point, but more likely these will be first to rotate out after I hit my initial 40 and find opportunities to upgrade. I'd love to run additional Black Knights or a Hypnotic Specter, but neither of those will come easy, given current pricing and availability. For now, the walking dead will suffice.

I also decided, for traditional 93/94, to continue playing Sedge Trolls with Underworld Dreams. To spice things up, I did give in to making my deck non-Swedish legal by adding Chronicles Cities and future-future-league Howling Mines. It's a more interesting deck this way, and helps support the claim that it's actually four colors. Here's the current incarnation: 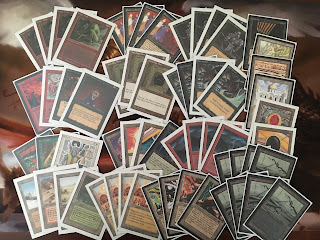 All the white borders aside (which I've never disliked as much as most players seem to), it still looks really pretty. Lotus is obviously missing, and I've been kicking around options for trading away my UL Emerald to net a CE copy. It's a tough pill to swallow; an alternate direction I could go would be a trade-up into a UL Lotus or maybe a real black-bordered Mox. And, if I'm looking toward EC rules and Eternal Weekend 2018, I probably should start practicing with four Strip Mines and certain cards from Fallen Empires. That's really a lot to think about for now, so we can leave things here for this week.