I managed to acquire a motherload of alpha cards recently, enough that the milestone of my initial 40 is well within sight, barring a handful of additional Swamps. Rather than spoil everything at once, I'd like to share the card from this lot that I consider both the most evocative, and least playable. 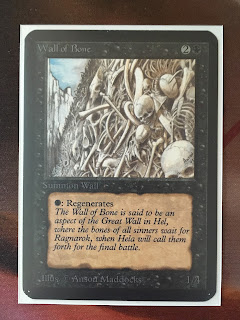 This is a sweet piece of cardboard, and alpha Walls haven't been particularly easy to find. From a utility standpoint, it doesn't do much aside from filling a slot. It does synergize well with Disk, so that's at least an excuse to include it. In the end, maybe anything that helps hold out for a finisher is enough.

I've always loved this art, though. As an uncommon, there weren't many circulating in my original Revised playgroup. Perhaps only a single copy, if my rose-colored memory can be trusted. And, as a green player, Wall of Bone was definitely a nuisance whenever it hit the table, staving off Llanowar Elves, Grizzly Bears, and War Mammoths to its lifeless heart's content. It was one of the cards that awed me early on, and inevitably contributed to my unrelenting love for the game that continues to this day.

I mentioned a couple weeks back that I was in the process of rebuilding a deck for traditional 93/94. I've been running B/R Sedge Troll/Underworld Dreams for awhile now, and though I still greatly enjoy those cards, I'm also itching for some variety, and possibly a little more spice. In the midst of kicking around ideas, All Tings Considered has me wanting to crack this open. I've also been allocating mental focus to Premodern.

The result of all this is a cycle of rumination that's difficult to break, and that's kind of how Magic gets you: always looking to one-up yourself, to take the next step toward a state of fulfillment that you know deep down you'll never reach. No matter how close you get, you always fall short; something about the game, or something about you, evolves. Then, it's on to the next deck, the next project, to more trades and purchases that serve as the tools you need to keep ascending that endless mountain.

Don't doubt for a second that it has an Arabian Nights expansion symbol above its text box.