This past weekend, a friend and I drove down to GP Columbus for a couple days. My token pickup for the alpha deck was a reasonably-priced and very clean Evil Presence: 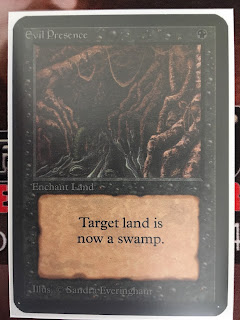 Having multiple Bog Wraiths, I figure this sets the stage for something approaching a viable strategy. Two-card "combos" are hard to come by in all-alpha, so I'll take what I can get.

Overall, I didn't go too crazy trading at the event, but I did manage to scrounge together enough low-end cards, including a number of extra shocklands, to come away with the Forcefield pictured below:


Sean did a little better, upgrading his Mox Ruby to an Ancestral Recall and picking up a NM Time Vault. In addition to the normal cardmongering, we spent the weekend hanging out with Sigmund Ausfresser (hopefully to the approval of DFB) and managed to get a number of oldschool games in, plus a Dominaria draft that I scrubbed out of, despite having pieced together a decent U/W fliers. My opponent was on B/W and had about eight removal spells. Such is life.

Anyway, a highlight was getting to try my R/G alpha/beta deck against Sig's mono-black all-alpha. It was maybe a bit unfair that my list was only 40 cards to his 60, but then again, Sig was running 16 Plague Rats.


I think everyone had a great time, but the coolest part was hooking up with LSV and playing against his version of The Deck. Sig had been in contact with him over a possible sale of his Juzams, and we managed to track down the Hall of Famer upon our return to the venue from dinner at a very old school Scottish pub. 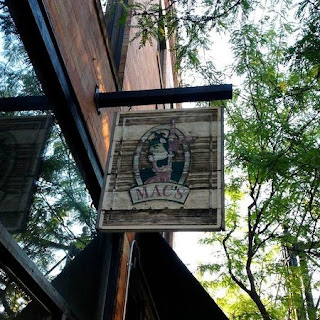 Mac's has been around for over 30 years, and the place oozes nostalgia. Not to mention good beer, great burgers, and, for the bold, a Scotch egg appetizer.

I don't know how into oldschool LSV is at this point, but I guess enough that he built a black-bordered version of The Deck and purchased Sig's Juzams and Serendibs. Here they are sharing a game on Saturday between rounds of the main event:


I managed to get within a life point of taking down the Great One with my B/R Underworld Dreams/Sedge Troll deck, but in the end LSV didn't have to tap his final City of Brass to Fireball me for lethal. At least the internet has permanent evidence of me hitting his Jayemdae Tome with my Chaos Orb.


That's about all for this week. Last thing I'll mention is a shoutout to Premodern, a 4th Edition-through-Scourge format created by Martin Berlin and championed on Facebook by Andreas Cermak. Check out the "PreModern - 95/03" FB group if you haven't yet run across it. 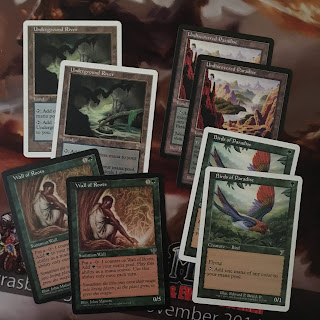 Personally, I have a lot of distinct memories from various eras within this time period, and the idea of Premodern speaks to me with a nostalgia that's undeniably different from 93/94, but still very cool. I'm heavily considering scraping together a deck or two and finding a few Skype games in the near future.