I've never been much of a competitive Magic player in the formal sense. I'm competitive when I play, and I like to think I'm a solid deckbuilder, but short of the occasional prerelease or 8-man Legacy pod, I've never been anything close to a grinder. I did spike a Type 2 FNM with White Weenie years back when some friends and I decided to stop by an LGS at the spur of the moment. Turns out Isamaru, Hound of Konda equipped with Umezawa's Jitte was pretty good back then. Highlights included my B/G Death Cloud opponent throwing his cards after I played Karma out of the sideboard (he was drinking out of a brown bag under the table, apparently a store regular who didn't take well to losing), a ten-year-old beating one of my friends and making him say out loud that The Unspeakable was his daddy, and my wife buying me a congratulatory greeting card a couple days later.


In addition to being a wonderful person, my wife Sara is also a fantastic mom to our seven-year-old daughter, who's nearly old enough to start beating face with 9 CMC Kamigawa-block legends of her own. We started working on the basics recently, though not using oldschool cards (teaching a 2nd grader to play Magic really makes you appreciate New World Order).

That definitely has come full circle. Anyway, Sara doesn't play much Magic these days. She never got into it beyond a casual level (mostly group games with our friends), though she still has her U/B Megrim deck that gave us fits back in the day. It would be Premodern legal if not for adding Liliana's Caress after M11 came out.


Anecdotes aside, while I haven't been deeply immersed in the tournament scene over the years, I have been something of a Legacy connoisseur for much of the past decade. Stoneforge Mystic is one of my all-time favorite cards, and for a while I was a pretty decent Death and Taxes player. I dabbled in other archetypes, too, and even though I’ve largely stopped playing the format, I kept together a mini gauntlet of Esper Stoneblade, B/R Reanimator, and Burn.

Having these decks assembled has been a way to still feel connected to Legacy and have a use for some of my favorite cards, even if I don't really play them. Keeping my Underground Seas tied up in Stoneblade was kind of a hedge against embracing 93/94 as my "eternal" format of choice, as opposed to more of a novelty. But I think it's safe to say at this point, that ship has sailed:


I came to realize, following the Deathrite ban, that I didn't need Stoneblade as an emotional anchor to Legacy. The truth is, if I sign up for a Legacy side event at a GP, I'll either play something fast and broken (B/R Reanimator) or otherwise just fast (Burn). Get in and get out. The odds of even making it to that point probably aren't that high; I'm more likely to find myself hanging out at a Scottish pub or playing oldschool with LSV. So I guess it's time to take this deck apart and figure out what can be put to good use. 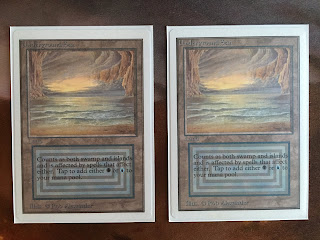 These Unlimited Underground Seas are among my most cherished possessions, and deserve better than sitting in a deck box that only gets opened every few months. Anyone who's played oldschool with me knows that I love Underworld Dreams, and despite not owning a Timetwister, Time Walk, or Ancestral Recall, I still wanted to try my hand at a blue splash in a 93/94 build:


The Seas and Cities (Arabian copies are in my Channelball deck along with Library, Chaos Orb, and AQ Factories) get me to eight blue mana sources, with the help of a few pink Islands. That's easily enough to support the three blue cards I'm running, and gives enough flexibility to add in Mana Drain or Transmute Artifact going forward.

In addition to the Undergrounds, there were a few other duals in the Legacy deck, most notably two Tundras: 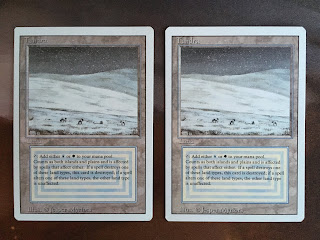 It sounds haughty, but I don't really care for playing Revised duals. It's entirely an aesthetic position, not an elitist one. Crisp Unlimited dual lands are so strikingly pretty, it's hard to come to terms with mixing them with the washed out colors of their successors. Not sure exactly what I plan to do with this pair. Probably hold for now, at least until Eternal Weekend. Maybe upgrade into a nice Unlimited copy, or use them in a trade toward a third piece of power?


As noted earlier, I love Stoneforge Mystic, as non-oldschool cards go. I have a fifth copy in my Ayli, Eternal Pilgrim EDH deck for tutoring up Skullclamp and Sword of the Animist. While I don't actively play Modern, I do have more of an outlet for it than Legacy, so it might make sense to relegate these to the binder until SFM sees an unban there. I also really love the old-border, judge promo Sword of Fire and Ice. I own the Light/Shadow and Feast/Famine promos, too. 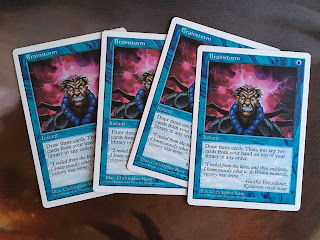 Aside from the Stoneforge package, the ability to play Brainstorm at maximum utility was a compelling reason to keep this deck together. On the other hand, not having a Brainstorm deck is a great incentive to dip my feet into Magic 95, something I've wanted to do for a while. The "Old School 95" Facebook group runs occasional online tournaments, if I can make the time and come up with the right deck. Admittedly, the white-bordered copies leave something to be desired. I may want to start buying Ice Age boosters in hopes of pulling the OG version. 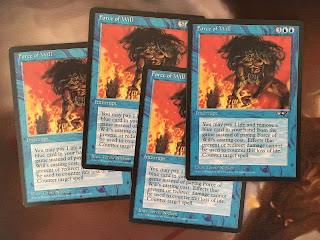 Force of Will is in an awkward spot where it's not legal in Magic 95 but also banned in Premodern. Still, ubiquitous eternal staples with iconic Terese Nielsen art are the kinds of cards you hold onto. I don't mind tucking these away for awhile to pull them out again on a rainy day. Is Magic 96 much of a thing, or should I work on acquiring enough power to play Vintage? 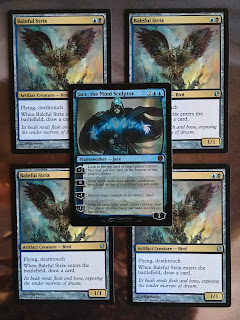 Baleful Strix is another pet card, so much that I was running the full four copies even though more optimized lists would suggest otherwise (I'm clearly not cut from the same cloth as the typical competitive player). I don't have a blue-based EDH deck, which seems like the natural place to slot these in, so likely a situation I need to make do with, for now. Jace feels a little non-casual for EDH anyway; maybe I should trade it for a fourth Antiquities Strip Mine? Although Timewalking says that three is enough.


Maybe shoot for a Mana Drain instead? The point is, oldschool Magic has become more and more of a one-way street. It's not that it's pushing out other formats, but it's triggered a shift in my Magic priorities and how I engage with the game as a whole. The value of being part of this community paired with the intoxicating nostalgia of the cards continues to be worth the price of admittance.

Sometimes there are just casualties along the way.