This isn't a post about alpha specifically, but it does harken back to 1993. One thing I've often advised those starting the steep climb of getting into oldschool Magic is to prioritize acquiring cards for which no reprints are available. Unless you're hard-set on playing Swedish rules (and maybe even if you are), you'll get more play value for your dollar from buying white-bordered Erhnam Djinns alongside reserve-listed rares from Legends and Arabian. This isn't any kind of secret, just common sense. Magic is a luxury, in and of itself. Oldschool Magic is a luxury within the hobby. Black-bordered Erhnams and Wizards' Tournament decks cast us several levels deep in extravagance.


This doesn't mean that you should never follow your heart and acquire a playset of black-bordered Factories. In the years I've been accumulating my 93/94 collection, I've embraced the OG allure more often than not. For me, it's never been about total optimization; you want to find the right balance between crafting a solid deck and feeling satisfied spiritually.


Speaking of life goals, I've always tried to keep at least one Swedish-legal deck in my 93/94 arsenal ever since I first got into the format. This is merely a matter of personal fulfillment and nothing by which anyone else should feel bound. There's one card in particular, though, that's always presented a challenge - a card that's critical to deck construction but at the same time feels superfluous to own in OG, since the white-bordered copies, even now, can be had for around $10. I eschewed the extra luxury level for as long as I could, but recently gave in to the siren's call. Splashing a third color into Swedish-legal oldschool builds has finally become a reality.


My sacrifice to acquire these was a spattering of narrower cards, mostly Unlimited, for which lower-cost substitutes are available. I was never willing to part with black-bordered reserve-list pieces to kick the Cities off my bucket list. Could I have done better buying them back in 2015 for $50 each? Probably. But there were more important goals to achieve in that context, and I wasn't yet ready to make the emotional commitment. 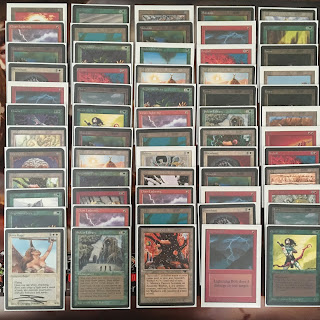