When building an all-Alpha deck, every card added is a treasure. 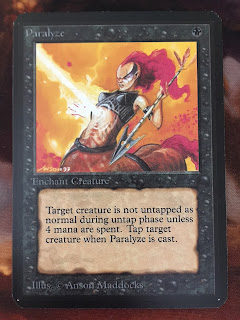 I don't feel like my friends or I ever ran Paralyze in our original Revised decks. Between our multiplayer chaos format and suboptimal deck construction, games consistently went long enough that an effect able to be worked around for four mana or Disenchanted didn't seem very relevant (and likely wasn't). Throngs of the common sat unused in our collections, one of a handful of cards you'd find a dozen unplayed copies of flipping through our black piles, along with Fear, Weakness, and Erg Raiders, though the latter we gave to Adam when he decided to see how many he could gather from players who didn't want them. He had more than a Starter Deck full of Revised Erg Raiders at one point. Ironically, it was actually a solid card, had any of us understood the first thing about mana efficiency or playing low to the ground. Alas, Sligh was yet to be discovered.

The Alpha card pictured above has practically doubled in price since I bought it, which might feel nice if I didn't want more copies. I'm coming to grips that I may end up having only a miser's Paralyze and Terror. Drain Life and Pestilence are also on the radar. At least I've already acquired the Disk: 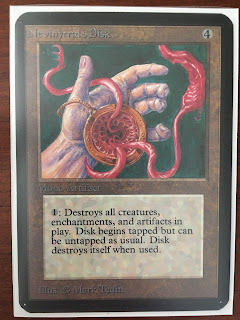 The few black Beta cards I'd accumulated for this project since January have been relegated to the trade binder. This deck will be all-Alpha, or bust. Ultimately, I'm only out a few Frozen Shades and Scavenging Ghouls; my Dark Ritual and "dark art" Swamps get plenty of burn in my traditional 93/94 "Underworld Troll" build. What's scarier is the prospect of acquiring 30+ additional Alpha cards going forward.

The climb is now underway in full, with the hope being to reach the top before Alpha basics hit $50 for NM. At the current pace, that may not be far off.