The Akron Legionnaires convened on the night of Friday, September 13 for a mini Ice Age block tournament and the awarding of our first Akron Legionnaire prize card. But even before lunch, the full moon was showing its force, targeting Bill's lower extremities. 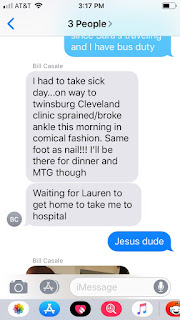 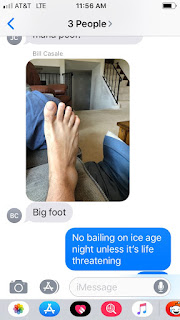 For a finance professional, Bill sure has had his share of fucked-up incidents involving his feet. Fortunately, this is a man who would never let triskaidekaphobia or severed limbs keep him from slinging old cardboard, and with full bellies courtesy of Oak & Embers Tavern and smokehouse, we assembled in my basement to temper the vestiges of an Indian summer with the coldest block of Magic: the Gathering.


When we arrived, the poolMagic table was laden with gifts and cards for everyone to sign. I strove to be a gracious host for this inaugural event, and my efforts were bolstered by my compatriots, who each brought their own contributions for the coffers.

With the formalities out of the way, it was on to the games. In lieu of a Swiss + 1 setup to accommodate just the four of us, each person played a match against every other participant to determine Finalist A before doing battle in a four-player chaos game to determine Finalist B. The two finalists would go head-to-head in a tournament-deciding match, with the winner receiving a signed (by us) Legends copy of Akron Legionnaire. A creative winner would then be awarded a signed, white-border copy.

For my part, I compiled a black/white deck that I dubbed "Insidious Catapult" after two of its signature cards. My overall plan was to attack with small creatures and then fling them at the opponent's board using one of my all-time favorite artifacts, Skull Catapult. To keep things interesting, I also created an Insidious Catapult bingo game to fill out as our matches progressed into the witching hour. Every time I unlocked an achievement, I had my opponent initial its box.

And the winner is...


The MVP card of the event was undoubtedly Kjeldoran Outpost, which won pretty much every game in which it was played. If we do this again, it's likely that the meta will take Outpost into heavy consideration, and we'll probably see more land destruction in addition to board control spells like Pyroclasm and Withering Wisps. The play of Ice Age/Homelands/Alliances is refreshingly slow, with decks feeling somewhat more akin to draft than constructed. In the end, a good time was had by all!