There are a handful of events over the course of your life that shape all the days in between: accepting a job offer, moving across the country, meeting a specific person. For most of us, we have our lives on cruise control much of the time, at least in terms of the forest, as opposed to the trees (musings of a green mage, here). When we look back and reflect, we can often identify key points in our personal histories where things took a turn, for better or for worse.

For me, in terms of Magic, I think about falling in with my good friend, Adam, all the way back in middle school. I think about how he and his neighbor, Greg, introduced me to MtG (I even think about how hesitant I was to get into the game, being a month or so behind in collecting). Greg and I ended up attending the same college and roomed together for two years. The three of us remain close, 25 years later.

I think about moving to a new town at the age of 15 and starting at a new school, where I was nearly friendless before I happened to run into a classmate at an LGS a half-hour drive from where we lived. Neither of us knew that the other played Magic, but that's usually all the spark you need. The bond we have to this day is nothing short of unbreakable.

These are the events that shape our lives. I experienced another one eight years ago, about a month before my daughter was born (also a life-altering event, admittedly, but we're talking about Magic...). My wife and I were out to dinner and bumped into one of my coworkers, where through conversation with a third party we learned of each other's mutual interest in the game. It escalated quickly: we started slinging spells on a weekly basis, attending out-of-town GPs, pretty much becoming attached at the hip with anything related to MtG... and quite a few other things, too. Sean's no stranger to Old School Magic: we got into this together.

Often, you begin these days like any other day, not knowing that a specific occurrence or turn of fate is about to spawn a new chapter in your life. Such was the case two days before the new year, when (courtesy of the illustrious DFB) Bill Casale and I started chatting over Facebook. (Literally had to stop typing here because I get a text from Bill about how he can never manage to successfully post a blog comment.)

Anyway, Bill can tell his and Jim's story far better than I can. Suffice it to say that the four of us, all hailing from Northeast Ohio, have melded into something that I think we all agree has surpassed our expectations. Friendship isn't something that needs to be given a name or formalized in writing. But sometimes it doesn't hurt.

We are the Akron Legionnaires. 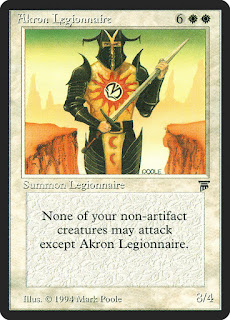 More on this to come, later...