We have a sweet little group up here in the suburbs of Northeast Ohio. Having rescued Bill and his brother Jim from a twenty-year time capsule, we've been slinging Old School spells together with reckless abandon since January. While 93/94 hasn't grown stale on me in the nearly four years I've been playing (not to mention the actual old school days of high school), we've been kicking around ideas for dipping into Premodern as a way to keep things fresh. Variety is the spice of Magic: the Gathering, after all.

In that vein, Bill and I got together this weekend to try our hands at the earliest sets beyond what most of us consider to be Old School. We decided, finally, that the sealed pool project we started early in the year wasn't going anywhere, so we went ahead and merged those cards into other remnants of the Ice Age-through-Alliances era that we had lying around, with most of Bill's cards having been defossilized from his dad's old collection, and mine largely bolstered by the Deckmasters 2001 box that I opened a few months back. (Obviously Bill gets the nod here, as my cards technically weren't printed until years after the original sets. Still, you have to start somewhere, and everyone knows that white borders are superior.)

Our goal for the evening wasn't really Premodern at all. The problem is that Bill and I both tend to be dreamers, and what we settled on was more akin to 95/96 Magic with some twists: we started at 4th Edition/Ice Age (the start of the Premodern pool) and allowed banned cards as one-ofs. Let it be known, however, that this wasn't entirely driven by insanity: it was at least partially alcohol-induced. The gourmet food selection for the night was Eisenberg hotdogs roasted over an open fire and topped with whiskey-infused barbecue sauce. The spread:

After sleeving up and devouring a playset of Eisenbergs, it's onto the cards. Bill brought a 5th Edition starter to crack for his deck; I was lacking in format-legal sealed product, so instead busted two packs of The Dark that I'd been saving for the sealed pool. Bill rips the gunslinger-rare trio of Sand Silos, Obelisk of Undoing, and Stasis, but I one-up him by opening Bone Flute and Fire and Brimstone. 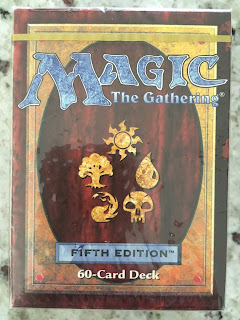 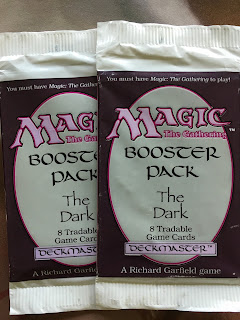 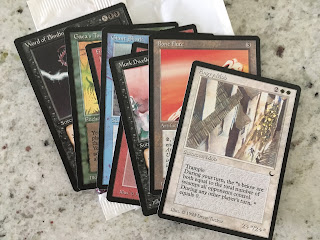 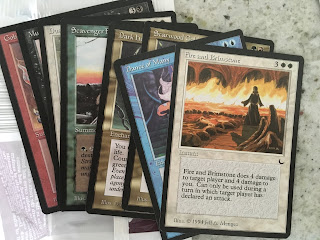 Apparently in Bill's household everyone has to play their "spirit animal" colors. I'm not interested in fucking with Casale voodoo so I swallow any complaints about Bill constructing a second blue/red deck.

At some point, games finally unfolded. I was off to the races with my black/blue concoction, discarding Baron Sengir to hand size to set up an early Animate Dead that went for lethal in game one. 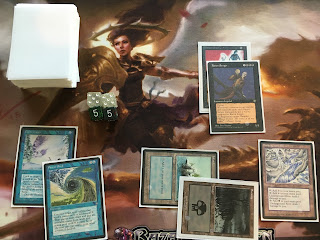 The match went the distance, with game three being a slugfest up until the point that Bill felt my Abyssal Specter warranted casting Jokulhaups. A few turns later, the Baron reemerged, this time as a 6/6, and extracted Bill's remaining 18 life points in three gruesome chunks.

Next up, I pitted a green/red pile against the field and relived the power of the original green Ball Lightning, Yavimaya Ants. Turns out the cumulative upkeep cost works as protection from Control Magic! 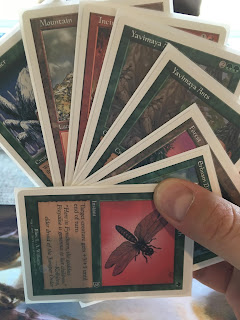 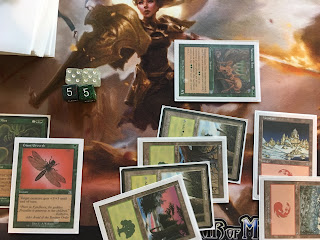 When Bill opened the 5th Edition starter and rummaged over an Initiates of the Ebon Hand, I realized that my Soul Vise deck was technically legal by our arbitrary Premodern non-standards, so it was time to take things next-level after exiling some lemon meringue pie. 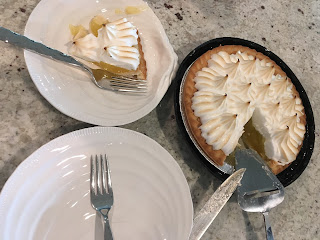 We managed to fit a regular 93/94 match in before the night was out, with Bill's "Dragon Genealogy" deck outlasting my black/green Thallids after I stifled myself underneath a Nether Void. In any case, we've really latched onto the idea of exploring the Premodern card pool slowly and incrementally, starting with Ice Age block and progressing through the years in a controlled fashion, whether by incorporating additional sealed product, or otherwise. Whether we'll stick with this agenda remains to be seen, but we're off to a good start.