Redundancy, Catching Up, and MFCLE 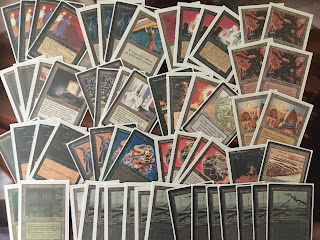 Last year I threw this casual deck together to experiment with combining the shell of Titania's prison and an additional win-con in Underworld Dreams:


The deck had some decent synergies: Howling Mine naturally plays well with UD, and the idea was that you could control the flow of card drawing with Relic Barrier or bleed the opponent with Dreams damage based on the situation. There were some question marks too, like why was I trying to pair Howling Mine with Hypnotic Specter? Overall, not a very polished attempt.

I did manage a couple games where the plan came together and Dreams + Song closed the deal while the rest of the engine kept the opponent from mounting an offensive. The problem with this shell, though, is that Mines + Orbs + Relic Barriers consume such a high number of slots. There's not a lot of room for cards that kill the opponent or hard answers to threats that slip in under the gate - which tended to be frequent. In the end, not having white's ubiquitous removal package (not to mention Balance, which is well-suited for a deck that churns out noncreature artifacts and enchantments) was a bit of a death knell to the whole thing coming together.

So, what did I learn from this endeavor? Probably very little, if this post is any indication.


Xenic Poltergeist is one of those cards that I've seen a thousand times, read maybe once or twice, and never gave much else of a passing thought. But it does add a touch of redundancy to the idea I tabled several months back, and I wondered what might come from trying it out in a reincarnation of the previous deck concept. Our local group has pretty much settled in with the Atlantic rule set, since we enjoy Fallen Empires but prefer to eschew multiple Strip Mines.


This revision streamlines the plan of staving off opposing threats long enough to bleed and/or pummel away life points from multiple angles. I decided to forego Ritual/Specter and the deck-clogging prison package while retaining an artifact base that leans heavily on cards like Ivory Tower, Forcefield, and Icy Manipulator to keep itself alive. The Dreams + Song win conditions are still present, but additional slots are allocated to hard removal like Terror and utility spells like Animate Dead. I preserved two copies of Howling Mine since it functions well with Underworld Dreams and can help me dig for an answer or finisher. This pile is far from tuned and likely won't put up a great win percentage (even at casual tables), but hopefully the play experience will be fun and not quite at odds with itself as the deck I brewed last year.

In other news, we've slacked on keeping our sealed deck project going, three months into the year and having only played our pools once. It's on the radar to follow up on this again soon, but the emergence of a growing local playgroup in the Hudson/Twinsburg area has diverted our efforts. The games have been flowing strong in our neck of the woods, and the lust for slinging old pieces of cardboard hasn't shown much sign of tapering...

Oh! I also managed to do pretty well last month at the Cleveland Rocs Old School event for GP (er, MagicFest) Cleveland, earning a 6th place finish out of 38 participants along with a 5th place "most creative" nod. My list was a souped-up version of a casual deck I've been working on for a little while.


I've said before that I feel like Untamed Wilds is underplayed in Old School, and wanted to show that there's merit to alternate/budget ways of ramping into big spells. I was able to prove it by squeaking out a nail-biter of a match against master brewer (decks, not beer... or maybe both?) Rajah James and his red aggro-Workshop. (Rajah, by the way, is one of the nicest dudes you'll ever meet, in addition to having orchestrated the entire event.) I also had the honor playing against Shaman Ben's monoblack discard and Jaco's Naya Bazaar Zoo at the top tables. Best of all, the event raised more than $1,700 for charity. Way to go CLE!


Last bit before I go, and at the risk of straying too far off topic, any AD&Ders in the oldschool MtG community? Two good friends and I have a strong campaign going that we've been chronicling here since last January. Purely providing the link for anyone who happens to have interest in following along. Over and out!