Green was my first Magic color. Although white is probably the color I most associate with now, I flourish in what players today refer to as the "Abzan" wedge, and green is still a vital part of my MtG identity. I'm certain that I've tapped 100 times more Forests than Islands in my career; in the beginning, my friends and I turned our noses up at the power of the wind and waves in our naivety, believing that counterspells and unsummon effects were inferior to answers like Terror, Swords to Plowshares, and Desert Twister. Over time, rightly or not, I came to liken blue to a quality of arrogance and smugness. It felt like some players compensated for their inability to control the world around them by trying to regulate people's actions in a card game. To this day, I enjoy playing decks that fight through control elements and leave opponents knowing that their attempts to manipulate me failed.

But I digress. This is a deep psychological spiral that took root in the mind of a teenage gaming nerd over two decades ago. I do own a Mana Drain now, even if I've never cast it.

So where do we go from here?

Fallen Empires. This set has gradually been tightening its hold on me for a while, whether through opening a 24-year-old booster box, listening to Jimmy Cooney gush about the set's tribal synergies, or reading a tournament report by Midwayfair, who recently stormed the Sarpadian battlefield with Thallids and Derelors. I've been on the receiving end of Jon's deck in a casual match or two online, and the fear it evokes is real.

I'll bring the FE topic full circle in a minute, but first, why is nobody in oldschool playing this card?


Particularly in a budget or non-powered environment, a three mana Rampant Growth that fetches a basic land into play untapped feels reasonably solid. Pair with City of Brass, Fellwar Stone, and Birds of Paradise, and I wonder why more players aren't sleeving up decks that churn out turn-three Sol'kanars and Jasmine Boreals, especially when they don't even need moxes or duals?

For my personal case study, I'm just looking to aggregate as many Forests as possible. I learned this blueprint from my good friend Kevin, a longtime green mage and one of the smartest and most humble Magic players I know, who over the years has taught me with his casual decks that mono-green can bring about a rude awakening to end games quickly.


There's definitely a satisfaction to be taken in alpha-striking with an army of 2/2 basic lands that doesn't come with winning on the back of a lone Serra Angel after countering all your opponent's spells. But why attack with a handful of 2/2 Forests when they can all be 2/3 instead?


Thelonite Druid is another gem I'm surprised to not see floating around more in budget builds. Maybe the decks are out there and I haven't been looking under the right rocks. Either way, this is certainly a type of effect that doesn't come easily in oldschool. Let's see what we can build with it...


The first thing my deck wants to do is leverage green's ability to accelerate mana. Including playsets of Llanowar Elves, Birds of Paradise, and Untamed Wilds takes this to the extreme. Additionally, Elves can serve as an attacker since the deck should typically go wide, and Untamed Wilds ramps the Forest count to help fast-track my endgame. Mana-producing creatures can also be used to pay for Thelonite Druid's activated ability, as I'll want to save my Forests for attacking.


Since I'm mono-green, removal needs to come in unconventional forms. I feel like this deck should generate sufficient mana for Desert Twister to be viable, and it's the only answer I really have to something like Moat, which otherwise thwarts my entire strategy. The combination of Scavenger Folk, Strip Mine, and a miser's Ice Storm provides some resilience to artifacts, Mishra's Factory, and Library of Alexandria. And certain problem cards like Maze of Ith and Icy Manipulator shouldn't be as effective against a battalion of walking trees.


A package of Giant Growth and Avoid Fate protects my Thelonite Druids and helps push through extra damage. While it can hardly be counted on as removal, Giant Growth does occasionally fill that role, especially with Tracker. My deck wants to make sure that Druid lives long enough to use his ability, and both of these cards support that goal.


This Fallen Empires assortment represents the deck's primary offense. As I've learned firsthand from Midwayfair, staff-wielding mushrooms can get out of hand if left alone too long, and having early bodies to chip away a few initial life points should make closing the door easier once a Thelonite Druid comes online. I was hoping to save a couple slots for traditional threats like Argothian Pixies and Elvish Archers, but space is getting tight so I'll see how well the deck performs without.


Sylvan Library is far from an auto-include in decks for me these days, but the desire to dig for Druid in addition to the shuffle effect provided by Untamed Wilds makes a reasonable enough argument to give it a go. With an active Sylvan, Jalum Tome lets me see even more cards and sculpt a better hand. 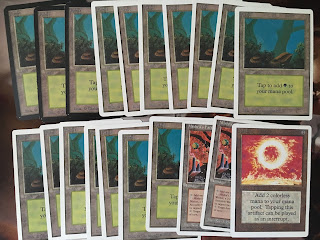 The deck's mana rounds out with Sol Ring, seventeen Forest, and two Mishra's Factory. While I want to run as many Forests as possible, Factory still gets in for two and can be activated using a Bird, Elf, or Sol Ring as part of an assault. Having a Factory presence in any deck that cares about the ground game is usually important. 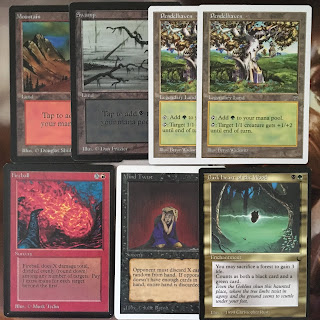 While that closes out my initial sixty, I always love the idea of splashing a color for additional value. In this case, the combination of Birds of Paradise and Untamed Wilds yields nine off-color mana sources with the inclusion of a single basic land. Pendelhaven has fourteen 1/1 targets (not counting saprolings) as currently constructed, which may make it worth the loss of one or two Forests. Though I've decided to forego these options in the spirit of going all-in on Thelonite Druid, it's still worth acknowledging their potential.

Oldschool Magic really offers a ton to explore in the casual space that skirts outside of traditional archetypes, even on a budget. No idea yet how this list will fare, but I definitely look forward to some awakenings. 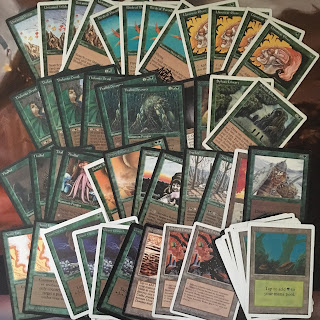