This week is another unimpressive but necessary include. At least I was wrong about only ending up with a single Paralyze. 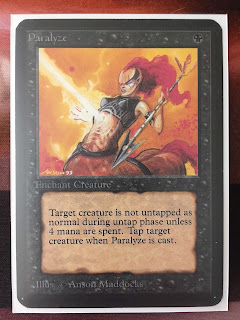 My eighth alpha card, out of 40+, makes 32 more to go, with 38 weeks left in the year. The move away from beta was a minor setback, but the pace so far is still fine. I've been working on a couple of large trades recently and hope to post some sweeter acquisitions in the coming weeks. The Wizards' Tournament is over now, which could either slightly taper demand for alpha cards, since the participants already completed their decks, or (more likely) increase demand as more players worldwide are inspired to construct their own alpha builds, in addition to the natural trending of availability for old cards. It's not like anyone's selling off; my expectation is for the cards I need to continue to grow scarcer and come at greater expense at the year wanes on.

Once I have a deck, though, I'll always have it, and can work on improving it at whatever rate I choose. This year is all about getting to the first incarnation, finding the necessary basics, achieving ground zero. 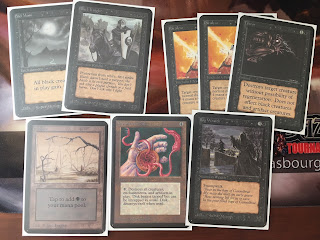