Back on the train for week 11. Almost three months in, I'm finding myself compelled to try for all-Alpha. 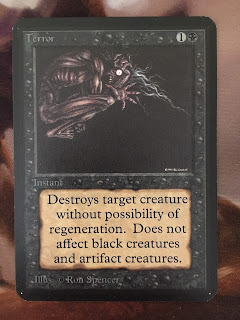 If I did, I could present a decent starting point: 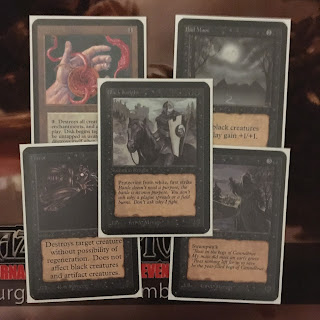 As an Alpha project, a 40-card list would suffice, giving me 41 weeks left in the year to acquire the 35 cards needed for a playable deck. Alpha is definitely a much more difficult climb, with solid commons easily topping $20 and higher for NM. I'd also need around 16 Swamps, at about the same price point each. Even at minimum, that's a $700 additional investment, and let's be honest: the minimum is out of the question. Only two of the cards pictured above are valued at less than $150 or so now. There would be more major pickups, no doubt.

It's something I need to give more thought to before I commit. I also don't think the option to splash a second color would be out of the question, even running a single Bad Moon. Already having the red/green Beta (+ a few Alpha cards) deck makes assembling a black deck at anything less than all-Alpha feel like a failure to go all-in.

Speaking of red/green, I recently managed to finish this playset:


Every once in a while a deal comes around that enables you to execute a series of transactions and walk away ahead. I won't get into details here and now, but suffice it to say that my last two Balloon Brigades were netted for about $15 apiece, a situation that fell together just right.

Sometimes you need to create your own luck.