Based on the increasing difficulty of acquiring NM Alpha/Beta cards, I'm trying to toe the line between pulling the trigger on smart pickups where I see opportunities, and not rushing to drop $50/day on cards that I'd otherwise put off until later. I do agree with the recent advice of Alpha-veteran David Wojtkowski from the Old School Magic 4life Facebook group:


decide where you want to be as a player and collector and strike at your ability level. choose both wisely and swiftly. i dedicated 2017 to getting a playable Alpha 75 and finishing my old school deck. i wouldn't want to be doing it again.

I thought about trying to go all-Alpha but wasn't willing to make that commitment from a cost standpoint, even though I fully appreciate the allure of round corners and try to incorporate as many as possible into my updates. Could I end up at an all-Alpha pile by year's end? Possibly. But I don't want to tie my hands to it, or risk getting in over my head.

In any case, Channel is a card I'd been looking to add to my red/green Alpha/Beta list for a while. While not having risen in price too much yet (and probably suppressed somewhat from being restricted), decent-condition copies have felt fleeting. $30 for this one seemed worth avoiding future regrets: 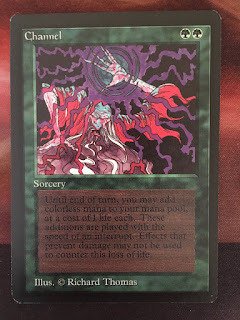 I slotted this in for my Alpha Chaos Orb, which I want to keep available for traditional 93/94 builds. The R/G deck already runs Fireball and two Disintegrate, making early wins out of nowhere highly possible. I don't feel too bad pushing the envelope in a 40-card list, since I'll most often run it against Swedish or EC rules 93/94 decks of higher overall card quality.

I've been thinking about writing up this deck in more detail, but I'd like to find a couple more pieces for it first. A few cards, like Stream of Life and Tranquility, probably need to go.