Hi, I'm Matt. You might [not] remember me from such blogs as first edition adventures and, less recently, Scars of Battledale. In any case, I started playing Magic: The Gathering in 1994; a couple years back, old school Magic (aka "93/94") helped me rediscover my roots in the game, as it has for many others. I wrote about my enlightenment here.

Though the journey into old school formats has been nostalgic and fulfilling, I'm ready for a new challenge: as a new year resolution for 2018, I've decided to try my hand at a 93/94 deck comprised of only Alpha and Beta cards, adding (roughly) one new card per week, for 52 consecutive weeks. The end result, next December, should be a 93/94-legal, all-black-bordered pile.

Scrounging together the few A/B cards I already own, I managed to compile this 40-card, two-color stack:


It's not much (and it's literally every card I own in these colors), but should be decent for playtesting. The aim for this year's deck is mono-black, in the spirit of the hell-inspiring cards that solidified my love for Magic as a kid. I do have a bit of a head start, which helps ensure a full 60 at the card-per-week pace. My initial offering: 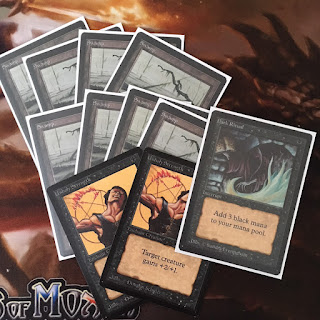 It's something to work with, and the Ritual is spicy. Unholy Strength was fear-worthy back in the day; the base sets provided few ways to deal with large black creatures, outside of Fireball and StP.

Once I get rolling, I'll assemble something playable by supplementing with Unlimited cards I already own. As a house rule, I'll keep the Unlimited portion singleton in nature, and always swap out white-bordered cards with new inclusions.

That's it. Posts to this site will likely be short and infrequent. It's mainly for my own edification and chronicling of my work.