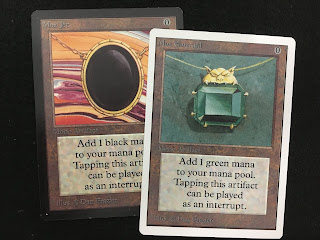 It started several months ago with a simple question: was the Alpha Chaos Orb that I'd acquired on a whim two years ago something I was willing to part with?

As Old School players, we often find ourselves caught in the mental crossfire of triple-sleeving decks worth upwards of five figures versus looking at our cards for the purity of what they once were. We don't always like to talk about it. Rather, we try to adopt the mindset (some of us more successfully than others) that the monetary value of our collections is inconsequential. That we can exist solely in the shadows of our much younger selves, when Magic cards were nothing more than bewitching pieces of cardboard; when the value of chase rares may have rivaled the income garnered from mowing a few lawns, but nothing so mundane as a house payment.

Personally, I never intend to sell my collection. Understanding that life happens and that sometimes plans change, the endgame for me is to cherish these cards until my final breath, before they get passed on to my daughter. As such, I don't perceive my Old School acquisitions as temporary, and I don't part with them lightly.

Back to the Alpha Chaos Orb.


The quintessential Old School card, the preeminent staple that belongs in every deck. The optimal version, with round corners and only mild scars from years of battle-hardening. The goal was never to go our separate ways.

But, weighing against that, the practical mind. The problem solver and negotiator. The rational, ambitious front that cares about market trends and analyzes the best ways to maximize the playability of my collection per dollar.

There was a compromise to be found here, but it had to satisfy both ends. The Orb could be sacrificed in an exchange that brought back sufficient returns in both deckbuilding and collection value. But it also had to return love.

And so, having slogged through the mental turmoil that led to an acceptance of relinquishing a cherished and nigh irreplaceable part of my being, I sold the Alpha Chaos Orb to a willing buyer at a fair price over the summer. It was a seamless transaction: the purchaser was extremely friendly and easy to work with. He was actually a reader of this blog (which definitely helped create a foundation of trust) and had a deep appreciation for Old School Magic as well as the specific card he was obtaining. I was able to rest easy, knowing that my prized, lava-vomiting sphere of annihilation would be tossed in the air by worthy hands.

In the aftermath, I was left with the proceeds, which for an Old School player fuels a rush unmatched by most other feelings a human can experience. The possibilities were vast, assailing my consciousness as I churned through the options.

The first order of business was repentance. Prior to deploying funds elsewhere, I made a point to acquire this:


With the white-bordered replacement in hand, I was playing with house money the rest of the way, and set aside most of the remainder for Eternal Weekend. Legionnaire Bill has already published a wonderful article recounting our total experience, so I'll use this post merely to document my acquisitions, rather than steal any of his thunder. The rest of the proceeds from the Alpha Orb, along with a few smaller trade chips, yielded this bounty:


In the end, the Alpha Orb netted me the Unlimited copy, the Unlimited Mox Emerald, and the Unlimited Time Vault. The Beta Swords to Plowshares (my second) is attributable to other fodder, and uptakes an immediate spot in White Weenie Bazaar, replacing a Revised copy. I had no reservations about cracking open the two BGS cards, which was executed posthaste upon returning home from our pilgrimage. The Mox Emerald is currently residing in my black/green Thallid deck, along with the Beta Mox Jet that I traded into last year.


The Time Vault, not to be forgotten, is a card that I've pined over for literal decades. I remember my LGS having an Unlimited copy for $40, sometime around 1994 or '95. Never having been a VintageType 1 player, Time Vault always represented an indulgence that I'd never have a practical use for. After all, it took me getting fairly deep into Commander before I was willing to purchase this:


Although short-term the Time Vault is housed safely in my binder, I'm confident that its day to claim a slot in a coveted deck will come. While I don't have any aspirations to build Twiddlevault, I do have interest in niche formats like Magic 95, and in casual deckbuilding that allows for the incorporation of Ice Age block cards into the earlier set pool. Plus, Scryings is coming soon! Maybe Mg will throw us a bone...