(On a side note, my Soul Vise 95/96 deck continues to generate some fairly intense and epic games within my playgroup. This week, I added 2x Glacial Chasm, bringing the deck up to 62 cards. I've also been considering a Stormbind.)

I have a few different Old School decks that I tune and play regularly with our local group. The deck that may be closest to my heart, as cliché and uninspired as it sounds, is white weenie. Mono-white aggro is part of my Magic DNA; while I never played it back in actual 1994, I embraced it at various points in the premodern and modern MTG eras, including having been a shameless frontrunner with "White Lightning" in the days when Waylay tokens could attack. Even during Revised, though, Savannah Lions was among my cherished first loves.


About a year ago, I put together my first white weenie incarnation for Old School. It had undoubtedly taken me awhile to let go of the reservations that everyone else had a WW pile already and that the deck practically built itself... and while the latter may be true, as with many things in both life and Magic: the Gathering, the devil is in the details. I quickly found that there was room for strategic refinement in slots beyond the obvious includes. There were also ways to make the deck truly my own, from the aesthetic of the particular versions of cards used to the specific card choices themselves. To wit: 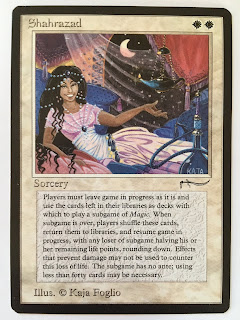 I added Shahrazad as a one-of several months back, under the pretense that a consistent and homogeneous aggro deck holds an inherent advantage in the subgame over a deck that leans on more granular synergies and restricted cards. It also stood to reason that, even at 50/50 odds of winning the subgame, the potential life loss was far more devastating to the opponent than it would be for the aggro deck, which often just needs a little extra push to deal twenty before running out of gas. In that regard, Shahrazad can be looked at as a burn spell, similar to a red splash for Lightning Bolt to gain extra "reach."

I still own the Shahrazad, but I removed it from the deck earlier this year during a round of changes. The novelty of playing the subgame (which ultimately is the paramount reason for running Shahrazad, regardless of any other rationalizations) lessens after a while, so I elected to give the card a break for the time being. It may make its return again at a later point.

In any case, all of this has been a long-winded introduction to the card that I actually want to talk about: 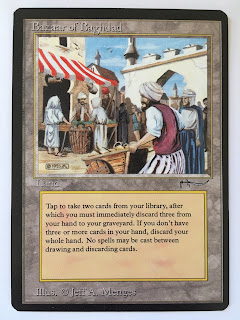 I've long been a fan of the theory and implementation of Jaco's Naya Bazaar Zoo; at the Old School tournament at MagicFest Cleveland, I finally got to play (lose) against the deck firsthand. Even before I did, however, I was engaged in a trade that would deliver my first (and only) copy of Bazaar of Baghdad. With Jaco being the foremost pioneer, much has been written about the interaction between Bazaar and Sylvan Library. Given that, I was surprised that I'd never read much of anything about Bazaar's seemingly amazing synergy with Land Tax.

I was already running three Land Tax in my white weenie deck (which, as an aside, eschews Fallen Empires cards in the name of Tundra Wolves and Mesa Pegasus based on personal preference, even though our group plays by Atlantic rules), and felt that I might benefit greatly from the ability to filter extra Plains into additional nonland cards by way of the Bazaar, and I've not been disappointed. Bazaar of Baghdad has become a "kill on sight" target for my opponents, and often times a single activation is enough to make playing the card worthwhile, netting myself card advantage that ultimately leads to victory.

Even without an active Land Tax, Bazaar can be quite effective. In a match I played last night against Jim's Tax/Edge deck, I drew the Bazaar in both games. In each case, it was Stripped after a lone activation (not a small thing in a one-Strip format), but both times, the two extra draws helped propel me to the win, once by drawing two "action" cards and discarding three Plains, and once (without Land Tax) drawing into two creatures and pitching three unneeded removal spells.


These examples are anecdotal to say the least, but at this point my sample size has grown large enough that I can confidently advocate for the use of Bazaar of Baghdad alongside Land Tax in white weenie, under the same ideology as Jaco uses it in Naya Bazaar Zoo. For the first time, I find myself seriously thinking about acquiring a second copy, as I'm rarely unhappy to see it or displeased with its utility, and my opponents have quickly latched onto targeting it with Strip Mines and other removal. I tend to swap around a handful of other singletons in the deck (currently Armageddon, Winter Orb, Wrath of God, and Jalum Tome) and would see a second copy of Bazaar replacing the latter, as it emulates Jalum Tome's effect but at the cost of only a land drop as opposed to five colorless mana, in addition to being able to dig through more cards, which is usually worthwhile even considering the drawback, given the engine provided by Land Tax.

That's all I have for this post, but interested to hear from others who may have delved down this particular rabbit hole...