Why We Should Stop Posting Decklists

This post may draw some ire. As such, before I begin, let me disclaim that this is intended more as a thought exercise than any attempt to change our culture. Personally, I enjoy looking at deck photos, especially for the nostalgia and uniqueness of the individual cards. Without a doubt, it's part of what pulled me into oldschool Magic. For those that have never dipped their toes into these intoxicating waters, a picture really is worth a thousand words. 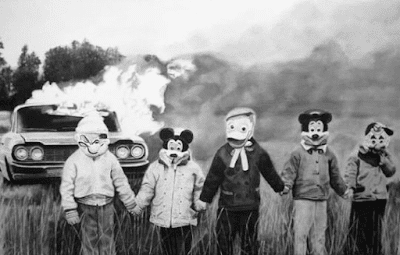 That said, despite my passion for 93/94 and its variants, deck construction in our optimized world has always felt overly refined. There are no secrets, not anymore: anyone can mine the web for dozens if not hundreds of tournament reports and devour the top-tier lists. The hive mind can work together to formulate the superlative 75 for a given archetype. As modern day Magic players, we can't unlearn what we know - at most, we can choose to turn a blind eye to accepted truths and eschew the established best decks to push a more casual agenda, when it suits our need.

After all, not everyone who has the cards plays The Deck or UR Burn.

At the same time, it's interesting to look back on decks from the days of yore and pine for a time when our collective knowledge wasn't so fluid. In actual 1994, there was barely an Internet, and information welled in shops and around kitchen tables, seldom able to travel faster than a telephone call. Our pockets existed mostly in isolation, with few individuals being privy even to all the cards that existed, let alone how to piece them together. We each lived in our own City in a Bottle; there's perhaps no greater example than Zac Dolan's 1994 World Championship winning decklist.

There's irony, to me, in that the deck photos we spew forth onto websites and social media to draw ourselves further into the #MtgUnderground work to sabotage one of its core tenets: a lack of optimization. What would oldschool Magic look like today if our deckbuilding knowledge had remained tribal? Certainly a quarter-century of immersion in the game has taught us to run the full playset of Lightning Bolt and Serendib Efreet... but what if we lacked the ability to see decklists from n00bcon, Fishliver Oil Cup, or Eternal Weekend? What if the only perfect information we had to draw from were the decks of Vintage, Legacy, and our 25-year memories?

Many life experiences are enhanced by a lack of information. As a child, what makes Santa Claus so magical is the impossibility of a single person delivering gifts to houses all over the world in a single night. Masters of gothic horror well know that the unseen and unknown fear is often more terrifying than the object of the fear itself, once finally revealed. 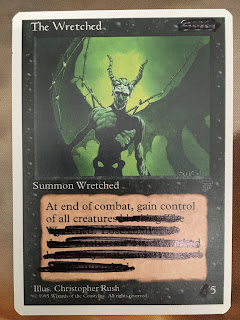 In Magic, a deck's allure is never so strong as when its full composition remains secretly withheld behind the veil of its creator. My opponent played a Millstone. Did the deck only have one copy, or were there four? Was the card's full purpose revealed, or does there exist a more intricate usage rooted in cards I didn't see?


Even when we know all the cards available in the pool, even with all the lessons learned from Dolan and Finkel and Flores and Duke and countless others... when an element of uncertainty exists, we begin to doubt. What do others know that I don't? What critical piece am I missing within my plan?

The photo of the Thallid deck rumored to have spiked a tournament is the bedroom light that reveals the demon haunting your insomnia as nothing more than a nightshirt hanging from a coatrack. At first, the truth is settling. But then you realize that you enjoyed the fear.

The more I consider the above, the stronger my desire to stop looking at deck photos and avoid having full knowledge of decks wielded by others in my local group. Even if I can preserve my ignorance within this small pocket of gaming, I can heighten the depth of my experience and indulge myself more completely in these most potent hits of nostalgia.


What if there were no deck photos in oldschool Magic? What if the community at large embraced the ideology of the Wizards' Tournament, and everyone was always kept guessing? Likely that ship has sailed too far from shore by now to ever put back to harbor, but that doesn't mean we can't set our minds free to churn away at the possibilities.