Week 19: Terror, and Fear of Missing Out

While I refuse to type the internet acronym, that seems to be where oldschool Magic is, at this point. Along those lines, I splurged for a second Terror recently, because its $45 price was practically a steal. 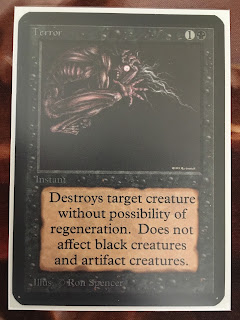 It seems like new alpha cards have started to resaturate the market, after a bullish run that had many NM commons pushing $30 and up. Terror is still a hard find, but overall it feels like things have begun to settle. Players realizing that their limited-quality alpha fodder is worth 500% of what they paid inevitably leads to a subset of people selling out, which helps offset others scrambling to buy due to fear of missing out.


It'll be interesting, when done, to add up all that I've put into the alpha deck and take stock of its [theoretical] value. I really have no plans of selling these cards off - all it takes is a look at the statistical rarity of alpha compared to everything that came after (the data is out there, for the sets that matter) to understand the premium and historical significance that rounded corners represent. But I suppose everyone has their price. How close to a Black Lotus does my alpha deck need to net me before the conversation gets serious?

I'm not including this card in my 40 since I had it before the beginning of the year, but it definitely turned out to be a solid buy: 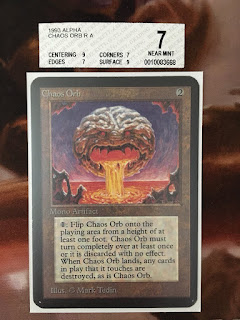 No plans to part ways here either, but it's hard not to feel the pull. Cards like this feel pretty irreplaceable, so I'm not about to decide anything rashly. I imagine other oldschool players find themselves in a similar boat. How many house payments does a Chaos Orb need to cover before you decide to cash out? Seller's remorse is a real thing, though, especially with old Magic cards. In the end, if you don't need the money to make ends meet, holding out as long as you can is probably the best approach. Flipping a white-bordered Orb onto a table lined with overflowing beer glasses wouldn't really be the same.