Week 2: In the bogs of Cannelbrae

Before there were Dementors, before there were the Nazgul (before they were depicted in film, at least), there was Bog Wraith. Along with Dark Ritual and Frozen Shade, the hooded figures of early Magic were among the most imposing and awe-inspiring to behold. 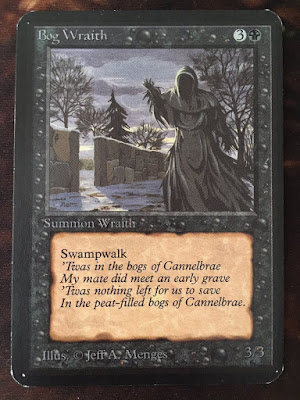 Bad Moon and Unholy Strength require a compliment of creatures, of course, and this will be the first. Swampwalk is an ability I could mold the rest of the deck around; with Evil Presence to enable it while disrupting the opponent's lands, with a possible sub-theme centered around Zombie Master, Bog Wraith seemed a reasonable early include. Alpha cards are difficult to come by, and this copy was a nice find.