I can't say enough about how great a friend Jason has been to me for the past 25 years. The Sylvan that I gifted him a while back undoubtedly did its job, and I'm thrilled to play host to the dividends as captured in his Old School Player's Ball tournament report. /Matt


It all started with one card: 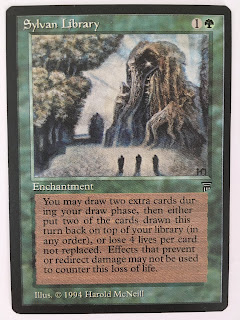 After selling my entire Modern and Legacy collection several years ago, this card—a gift from my friend Matt that was sent as a seed to get back into Magic several years ago—was the only card I held onto.

When I was introduced to Old School, this card became the catalyst for what would become my current collection, comprised entirely of cards from the 1993-1995 era, heavy on reprints from 4th Edition and Chronicles.  Matt also let me know about the existence of the Lords of the Pit, a Chicago-based group of Old School Magic players, and my hunger to meet and flop cards with these guys continued to grow, leading to my eventual registration for the 2019 Old School Player’s Ball.

Knowing I would be facing classic, fully powered Old School decks, I was almost embarrassed to bring my pile of mostly reprints, totally devoid of any power, to the tournament.  As it turns out, what you bring to the Player’s Ball really doesn’t matter—sure, there were Black Lotuses, Ancestral Recalls and Moxen aplenty, but more important than that is the love that goes into the decks built for the tournament.  These decks were designed to feature cards they actually owned and played with as a kid, to tell a story as the game played out, or in many cases, just to cram in old, inefficient, but fun cards to make cool stuff happen.

I wanted to feature the Sylvan Library in the deck I played and constructed an Ivory Tower/Island Sanctuary/Arboria prison deck designed to draw and mill out opponents while hiding behind Deserts and too many enchantments for them to deal with. 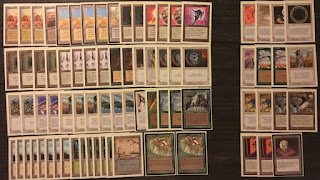 My fears about bringing an unpowered, largely untested, pile of reprints proved completely unfounded.  I found out quickly how little any of that matters, it was more about the experience than the results.  Here’s how the event played out.

Match 1: My first match was against Lorien, one of the Lords of the Pit, running RW Weenie.  I got over being starstruck pretty quickly, shared the story about my reentry to the game and fears about the tournament, and he eased me into the event by hitting me with Lightning Bolts and Chain Lightning about 5 times in the first three turns before finishing me off with a couple of White Knights.  Welcome to the Old School Player’s Ball 2019!

Second game, turns out that two Ivory Towers aren’t worth much without a draw engine, and a timely Dust to Dust ensured I would stay short on cards while he Disenchanted all my protections.  0-1 on matches, 0-2 on games.

Match 2: Second match was against Aaron, a local player sporting a powered WUB control deck.  I was definitely intimidated by power, having never seen an actual Black Lotus before, but was relieved when it was followed up by Royal Assassins and Sorceress Queens, no real threat to my deck.  By the time Aaron figured out what I was doing, it was too late.

Second game, I get hit with a Lotus and Mox powered Mind Twist for 7 early, emptying my hand, but fight back to Mind Twist him for 4, stabilize with Towers and Arboria, then grind to a win.  Despite all the power, his sideboard didn’t have enough answers.  1-1 on matches, 2-2 on games.

Match 3: My opponent was Joseph from the Northern Paladins, a Minnesota-based group of Old School players active in the community.  He was piloting a deck he calls “Valley of Nightmares” fueled by Living Walls, Necropolis and Diamond Valley. 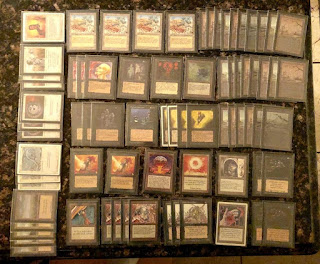 While Joseph is a super cool guy, it turns out our decks were a complete mismatch.  Game 1 he doesn’t have any answers for anything I play except Chaos Orb, and it turns out that Armageddon is really good against Nightmares.

Second game, he brings in artifact and enchantment hate, but I am fortunate to draw Disenchants for his Chaos Orb & Disks, and a timely Tormod’s Crypt empties his yard before All Hallow’s Eve can lead to any shenanigans.  2-1 on matches, 4-2 on games, I must admit at this point I’m feeling pretty good about things!

Match 4: This time I’m paired up with Jaco, another of the Lords of the Pit.  Jaco runs a very similar RW Weenie deck as Lorien in my first match, and the result is pretty much the same.  First game I die to early burn and an array of white weenies, and Balance isn’t enough to keep his board in check.  I need to mulligan more aggressively for Ivory Tower.

Second game, I board against burn but there’s just too much red before I find answers.  I’m mauled by Kird Apes and Lightning Bolts, and Jaco hits every disenchant he needs to keep my board clear of locks.  2-2 on matches, 4-4 on games.

[Jaco's deck was Naya Bazaar Zoo, a pile I've fawned over taken inspiration from and had the pleasure of playing against myself at the MFCLE event back in February. /Matt]

Match 5: Next match is against Chris, a player out of southern California.  He’s piloting a Juxtapose/Primordial Ooze combo, another deck fueled by Diamond Valleys.  This time, they eat eggs until he can either beat me with an army of 4/4 Rukhs or get a Primordial Ooze online, which he trades away with Juxtapose until I’m unable to pay for the upkeep and the Ooze eats me. 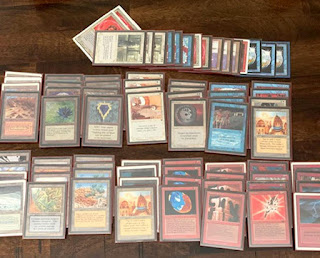 I had no clue what was going on.  I set up my lock and things were going well, until the card I dreaded to see in the main board rears its ugly face—Timetwister!  Timetwister resets his library and refuels his removal tools, and I slowly watch the game slip away from me while getting battered by an ever-growing Primordial Ooze I can’t afford to upkeep.  I have plenty of answers…unfortunately they’re all on the bottom of my deck and I’m unable to kill the Ooze before finding a Wrath of God or Swords to Plowshares.  The game took the whole 50+ minute round and I’m starting to feel the fatigue of a full day of Magic, so I concede the match and we call it 1-2 in his favor.  2-3 on matches, 5-6 on games.

Match 6: My next match is against one of Chris’s teammates, Mike.  Mike’s running UG Weenie, basically a mono-green build with a splash for Ancestral, Time Walk & Timetwister.  This turns out to be a pretty effective combo game 1, as I’m hit in the face with an Argothian Pixie and triple Giant Growth before I can stabilize or find removal.  Easy win for Mike.

Second game, it turns out the Deserts are a very effective green weenie deterrent.  I keep his attackers in check with Desert and Maze of Ith while getting Ivory Towers online, and by the time I find Arboria for the lock I’m at 60+ life, way too much for him to deal with before I grind out his deck.

Third game is a fantastic exchange of attacks, removal, locks, more removal!  Early pressure from weenies plus an unexpected Time Walk hurts (it was the first time I saw a blue card in his deck!), followed by Strip Mine + Regrowth + Strip Mine to clear my troublesome lands.  He keeps the pressure on and finds answers in Scavenger Folk and Crumble before I can mount a suitable defense and fall to his weenies.  2-4 on matches, 6-8 on games.

Match 7: At this point in the night, I feel pretty good about my performance, and I’m thrilled at the variety of decks I’ve gotten to play against.  Enter Danny’s mono-black discard deck, a ubiquitous and effective budget deck that can just wreck face in the right circumstances.

Game 1 I’m assaulted by a never-ending supply of Hypnotic Specters and Mishra’s Factories.  What removal I find is quickly disrupted by Hymn to Tourach, I never stood a chance.  Second game is more of the same, with The Rack sealing the deal on his end.  The games were fast, at least, so it gave me time to relax and catch up with other players.  2-5 on matches, 6-10 on games.

One of the players I run into is Ian, who also runs an Arboria prison-style deck, this one with Underworld Dreams as his win condition.  It’s a take on Arboria I hadn’t considered, though he seemed impressed with my build, especially by the fact that I won games with it.  He had been having a rough day with his list, so we shared decklists, gave each other some encouragement, and moved on to the final match of the night.


Match 8: My final match was against Alan from Tennessee, running a 4C Troll deck.  Of all my observations from the evening so far, the most surprising was how little a role power actually played in any of the games.  My games with Alan would prove the efficacy of these cards.

First game I’m hit by a turn 1 Juzam followed by Hymn, Hymn + Disenchant, Sylvan Library + Disenchant.  Alan nearly kills himself with pain from the Juzam and draw from the Sylvan Library while I hang on for dear life, and I triumphantly slap an Island Sanctuary on the table for the win…except Disenchant.  I feel brutalized by the beatdown but confident moving into my final game.

Unfortunately, my last game begins with a turn 1 Mox, Mox, Mox, Sol Ring, land, Mind Twist, nearly emptying my hand, followed by a pair of Juzam Djinns on subsequent turns.  There’s little that can be done against such openings, but I can’t really feel that bad getting hammered by such a potent pile. 2-6 on matches, 6-12 on games.

Despite the unfortunate turn of luck after the mid-point of the day, I had a FANTASTIC time meeting the Lords and playing with people from all over the country.  So many of the decks present were completely original, and everyone had stories about why they chose to play what they did, what inspired the decks, or the provenance of individual cards in their pile.

The brewery was a great place to host the event, and the atmosphere and attitude of the players was totally inviting, almost immediately dispelling any fears I had about the inadequacy of my pile.  It was my first tournament in several years, and my first tournament bigger than a store or regional event, and I couldn’t ask for a better crowd to spend the day with.

I’m already very much looking forward to the Player’s Ball next year as well as other events, and can’t wait to use some of the inspiration garnered from the event towards putting together new, original decks!