This past week at our oldschool night, I broke out one of my two [non-oldschool] Commander decks to play against a coworker who had the Vampiric Bloodlust precon on hand. I've had great fun with EDH in the past; my decks have been built and tuned over the last few years through swapping in new cards and upping the foil counts, with everything chronicled in spreadsheets on my Google Drive. I definitely subscribe to the "75% theory" formulated by Jason Alt, which is essentially that EDH decks should be good, but not too good. The name of the game should be fun, not narcissistic oppression.

Casual MTG is hard because "casual" means different things to different people. It's a subjective and ambiguous concept, so much so that, for a format like Commander, you need to have a full article series to even begin defining what it entails.

Here's a current snapshot of my Ayli, Eternal Pilgrim deck, for reference (bear with me, we're getting to the oldschool stuff...):

Anyway, we shuffled up and played two games, only 1v1 as the others were still jamming oldschool. Long story short, my opponent had too few lands in both games to keep up. I ramped into big mana and played solid creatures and spells, cards that I'd meticulously hand-picked for my deck: for their synergy, for their aesthetic, and for their appeal to the 75% theory, even though I didn't know exactly what that was at the time.

The fact that our games were essentially non-games aside, what struck me about the act of even setting up my deck and going through the motions is that it just didn't feel good. As much as I'd wanted to play a game of Commander after not having indulged for several months, as soon as we began, I wanted to go back to playing oldschool. My Ayli deck is still pretty, and still speaks to my own sense of aesthetic (as much as anything with modern borders can) and preferred MTG play style. So, what changed?

I think, more than anything, handling and reading the cards in my deck, strategizing my plan for each game, I was reminded how much of an arms race certain Magic formats can be. I'm always scared, when playing Commander... scared that Meren's going to stumble into an infinite combo, scared that The Ur-Dragon will drop a horde of fliers and swing for a hasted 40, scared that Edgar Markov will overwhelm before I manage to get off the ground or draw a critical wrath effect. "Scared" may not be the right word; it's really more like anxiety. Given a few turns, Commander decks can be so devastatingly powerful that you often either have to be the oppressor or the oppressed. Multiplayer games are different, but rely on politics and alliances in a way that I've never really enjoyed. I'm not personally very interested in having the outcome of a game decided by arbitrary factors like who wants to ruin someone else's day or perceives a specific player as the biggest threat.

In terms of deck construction, the MTG "arms race" exists in any format with an open-ended card pool. New weapons get printed, either forcing you to push out beloved cards in existing decks in order to keep up, or pushing out your own strategy entirely in the hands of your opponents. My formidable deck of today may falter in tomorrow's meta due to innovations wrought by cards that don't yet exist. For sure, many players relish this aspect of Garfield's creation, but for me, it causes anxiety. I tend to grow wary over time that I won't be able to keep playing the cards I love, and history often proves me right. Sooner or later, everything grows obsolete; in formats like Legacy, Modern, and Commander, it's kill or be killed. "Casual" or not.


Playing oldschool, for me, has the opposite effect. I can relax and shuffle up knowing that my Pendelhaven/Thallid deck won't be any better or worse in relation to the card pool one, five, ten years from now. Only relevant are my skill and that of my opponents, our local meta, and whatever B&R list we're currently respecting. I can play what I love, free of reservations, knowing that I can evolve my gauntlet at my own pace. The arms race that exists in oldschool is that of the secondary market and the fear of getting priced out of expensive cards, particularly power and duals. But the nice thing about 93/94 is that, once you acquire a card, you have it. That particular milestone is crested, and the anxiety of the arms race lessens with every additional piece you acquire. Though it's surely daunting in the beginning, the enjoyment and fulfillment that comes from slowly climbing the hill transcends any negative emotions associated with the format. At least, that's my experience.


Oldschool Magic is a wonderful, wonderful thing, and tightens its grip on me the more I play and interact with its participants, both locally and around the world. In addition to the community, nostalgia, and passion for the individual cards that results from immersing ourselves in the earliest days of MTG, we get to experience the game in way that's free from the mental turmoil of an ever-escalating arms race within the card pool that often culminates in the loss, whether through bans or obsoletion, of decks we love. These other, open-ended formats still have a place for many people, and even to a small extent still have a place for me, but the stark reality is that 93/94 and its variants have come to eclipse them by a mile.

These days, the Thorn Thallids have me firmly in their tendrils. 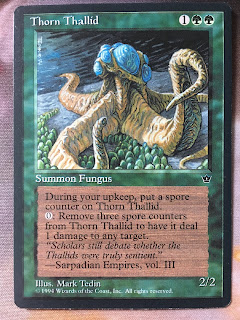